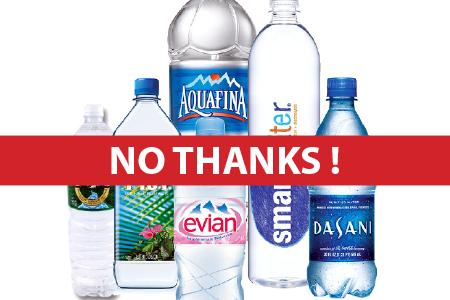 Did you know that 80% of the plastic water bottles we buy end up in landfills? Therefore, the chemicals leak in the soil used to plant your crops and foods and into the ground. The soil gets contaminated by the chemicals that can contaminate your food. Soil contributes 18% to making food organic. That means you have to pay extra money for organic foods (organic foods are foods that must be grown without the use of synthetic herbicides or pesticides) because food could be contaminated by plastic water bottles chemicals. If you don’t want to pay more for organic food, want a clean environment, and don’t want to put your health at risk by eating contaminated food.

The second reason why we should stop drinking plastic water bottles is because they are made of crude oil . Plastic water bottles are made from petroleum products called polyethylene terephthalate which requires enormous amounts of fossil fuels or the remains of dead organisms. It exists in liquid form in underground reservoirs in the tiny spaces within sedimentary rocks. Oil pollution can have a devastating effect on the water environment, it spreads over the surface in a thin layer that stops oxygen getting to the plants and animals that live in the water… It harms animals and insects. It prevents photosynthesis in plants. disrupts the food chain.

The third and foremost reason is because plastic water bottles really don’t get recycled. This is because you can recycle but you aren’t guaranteed that what you put in your recycling bin will get recycled! Americans throw away 35 billion empty water bottles a year. Out of everything we put in our recycling bin 50% of it never gets recycled. As you can see, recycling won’t necessarily help the environment. In conclusion, my goal is to get NSMS to stop drinking plastic bottles because they are harming the environment and every living organism in it, including themselves!